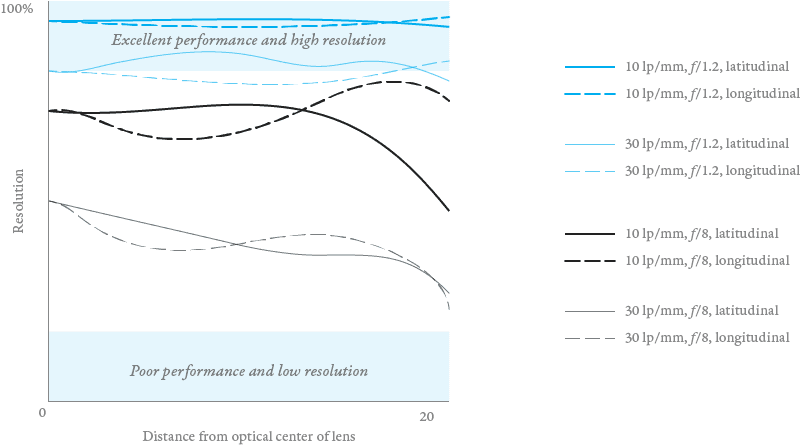 MTF charts help to objectively explain the quality and performance attributes of a lens. The charts plot the ability of the lens to distinguish between evenly spaced black lines in a one millimeter space. This resolving power is referred to as line pairs per millimeter (lp/mm).

Even so, you can read these charts fairly quickly from left to right and up to down. These charts are very helpful to see how your lens might perform and compare it against qualitative reviews from photographers. For example, the Canon 85mm prime lens performs exceptionally well at the widest aperture: it preserves high resolution from the absolute center of the lens all the way to the outer edge of the glass with excellent defocusing. You can see that in the MTF chart above in the top blue line. There is very little deviation of line resolution from center to outside. Both the latitudinal (lines parallel to the radius of the lens, shown as solid lines on the graph) and longitudinal (lines perpendicular to the radius of the lens, shown as dotted lines on the graph) lines on the graph match for the largest aperture opening. This lens is well known for it’s beautiful blur (bokeh) and extreme sharpness at wide apertures. However, the graph also reveals that the lens performs quite poorly when shot at an aperture of f/8. Even at the center of the lens, the resolving power for 30 lines per millimeter drops from around 82% to 48%, and continues losing resolution the farther from the center. What this means is that the lens is more a specialty piece than general purpose, and that you should not expect good performance from this lens at smaller apertures.

When looking at these charts quickly, keep these points in mind: